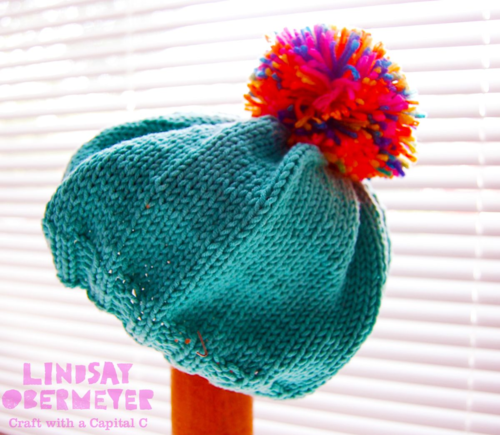 So, like a forgotten fire, a childhood can always flare up again within us.  ~Gaston Bachelard

With every hat pattern I've posted, I receive several emails and comments requesting the hat in a different size.  Okay, so I have written this one for a baby, toddler and young child.  I wanted to make a slouchy beanie with a big pompom.  It is a beanie that slides over to the possibility of being a beret but I didn't give it enough slouch to be a good floppy beret which is how I like them.  This is a beanie with a touch of attitude.  I think pompoms are a prerequisite of childhood, especially big colorful ones.

Dress designing . . . is to me not a profession but an art. -- Elsa Schiaparelli

I am beyond excited to have found this video by the house of Elsa Schiaparelli.  She was a huge influence on my early art.

Promise me you’ll always remember: You’re braver than you believe, and stronger than you seem, and smarter than you think.”
– A.A. Milne (Author of Winnie the Pooh)

This is a short video about my work with Dr. Amar Dhand and his research lab last year.  He was researching the impact of one's social network on their recovery from a stroke. Social network science looks at the effect of networks on the individual as awell as larger corporate structures.  Take a look at the video and if you want to learn more about the project tor become involved yourself then please take a look at my other blog. 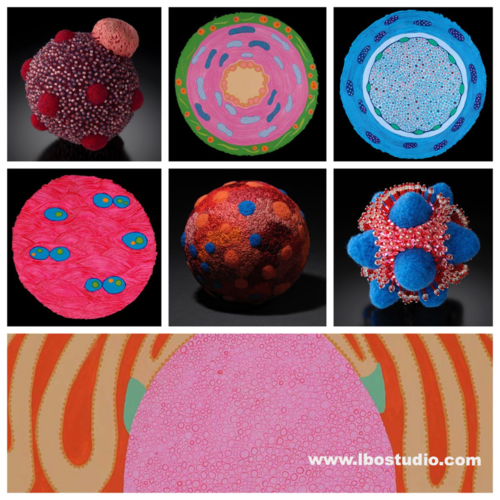 Every child is an artist. The problem is how to remain an artist once we grow up. -- Pablo Picasso

June 11th is the 10 year anniversary of my blog. Really?! June 11, 2006. I started my blog to record my creative process. Along the way it has done just that, as well as delve into my love of teaching art, and more recently becoming a DIY craft blog and now a bit more on cooking because of my change in my diet. The blog has become a bit of a journal and also a bit of letter writing to myself into the future.

Have you ever noticed that our earlier-selves know our future selves far more than we realize at the time?

I read recently of a professor who told his ceramic students that half would be graded on the quantity of work they made, while the other half would be graded on the quality of one piece.  Those who were assigned the making of the perfect piece failed.  They spent their entire time worrying over each detail, bogged by discussion of the cultural implications of their chosen material.  Those who made for the sake of making arrived at work that became suffused with meaning.  They had allowed discoveries to happen.  By preventing self censorship from negating production, they could whittle away at an idea until it began to take shape.  Delight came as much from the act of making as it did from the final product.

I want to make for the sake of making, letting each piece of work act as a point on a map toward the next discovery.

These words were from one of my earliest posts.  June 12, 2006.  I still feel this way.  I have  joy in making for the sake of making. It's that creative adventure, a thrill and a struggle until the end of the piece. For the past few months I've been struggling to figure out the next direction of my work.  I was overthinking it.  I had to just jump in and start making.  The making will lead me down the path.  While looking at exhibition calls, I didn't have recent work to submit, work made within the past three years. With that in mind, I knew I had to get cracking. Make for the sake of making and just trust that a cohesive body of work will emerge. 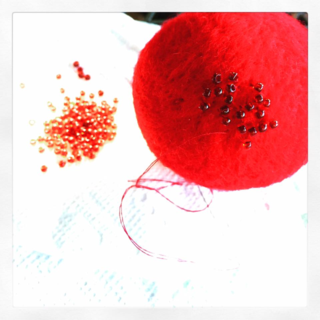 So here is the start into the future. Ta da!

The images at the top are the 4th collection in the Facebook challenge.  They are part of a series called Pattern Play and delve into a review of the microscopic patterns, real and imagined that lurk below our skin.  Photo credit: Larry Sanders. 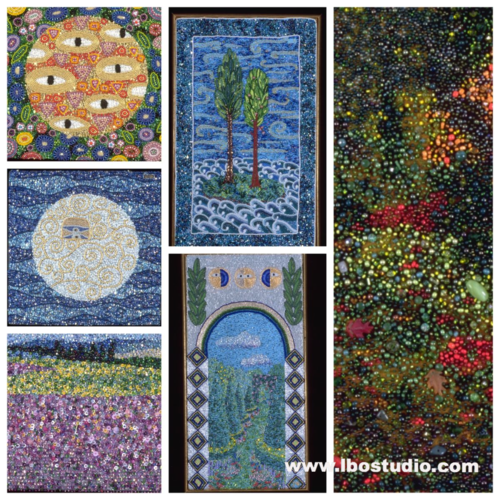 Every artist dips his brush in his own soul, and paints his own nature into his pictures. ~Henry Ward Beecher

A friend recently challenged me to feature an artwork a day on Facebook.  Well, as I am going through my images of previous work and looking at how I want to group them for a new website I am building.  I decided to focus on clusters of art rather than one single work.

The first post is of my Visions of Paradise series completed between 1988-1992.  They were my alternative reality to urban living with all the anger and violence swirling in the air outside my window.  I made a conscious choice to focus on the positive and the beautiful.  This series was well received, and was featured in books and magazine articles and a few of these pieces are now in the Museum of Fine Art Boston.

In 1992 I went off to graduate school in Seattle.  That same year I was diagnosed with cancer again.  My work turned from the exterior landscape to the interior. 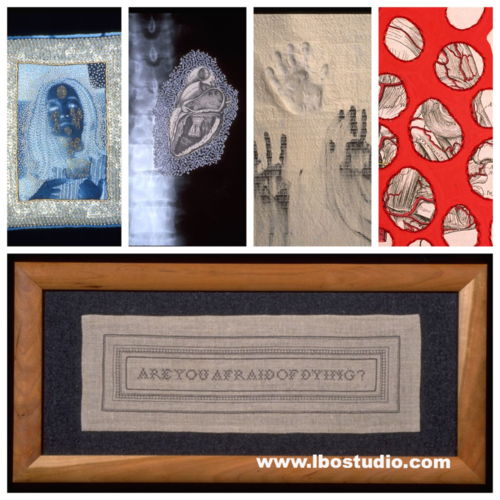 Much of this work has also sold,some to private collectors and the rest to a university oncology department.  The work allowed me to process, analyze and accept that cancer would be an ongoing problem in my life. I would never be fully rid of it. Basically at the root of this series was the fragility of the human condition and all the fears and anxieties that go along with it.

I continued on this same track but delved deeper into microbiology.This collection began with a grant. I wanted to show at the International Museum of Surgical Science. As I wrote the grant the story of a young Victorian woman developed. She was interested in medicine, but relegated to only the girly arts of embroidery and knitting. So while she embroidered patterns of femurs and leucocytes developed. Her sweaters were non functional and display the tumor they were intended to cover. 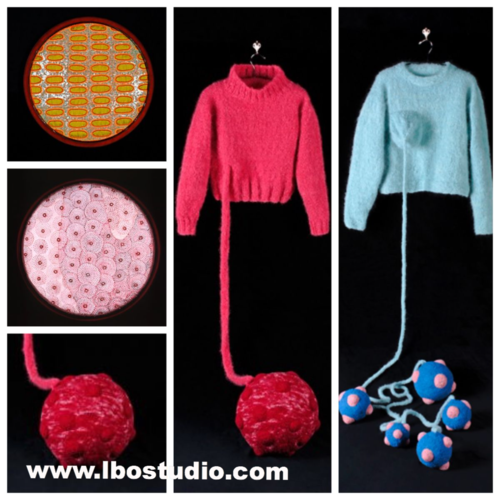 Look back to move forward : Short video of my knitted artwork

I've been spending the last few days reviewing images of older work to see if my new work makes sense within the continuum.  I realized as I was looking that most of my knitted art is not on my website, so i thought this video might make a nice summary of what I did in terms of performance art , sculpture and public art. 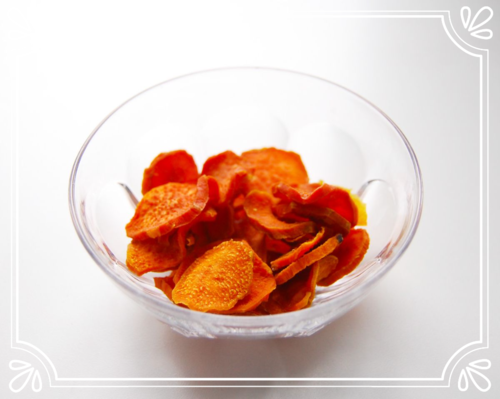 Never go to a doctor whose office plants have died. - Erma Bombeck

Since my new diet I have been spending hours in the kitchen testing different recipes, trying to establish what I like and don't like with my new diet.  I love food with a good crunch and since tortilla chips are off of my list, I decided to try making my own baked sweet potato chips.  Baking them rather than frying them preserves their nutritional value and allows me to use healthy fats such as olive oil or coconut oil. So i gave it a try in the oven first.  I followed this recipe. Tried it first in the oven set at 200 for two hours and burned a couple of batches.  Argh. Try again.

what do you do when you are told you are pre diabetic? Old age ain't for sissies. - A frequent refrain of my Gam

My grandmother also loved to say " Youth is wasted on the young."  I always thought the sayings were cute until I started to get older and see the inherent wisdom of them.  Old age sure isn't for sissies.  The other week I learned I was pre diabetic. Like having endured three rounds of cancer, a heart attack and a stroke weren't enough.  I was then later diagnosed with rheumatoid arthritis and now I am freaking, (slew of expletives) pre diabetic?! Oh hell no! I am not taking that one on the chin. Nope! Not me!  Grandma and Great Grandma had full blown Type 2 diabetes, so lucky me seems to have won the genetic jackpot.  I am not overweight, in fact I lean toward skinny despite my recent glamour curves and I exercise daily.  I've also been an organic eating vegetarian for 30 years.  So what the heck?  Again, genetic jackpot.

Continue reading "what do you do when you are told you are pre diabetic?" »

Upcycling a CD into a Woven Coaster 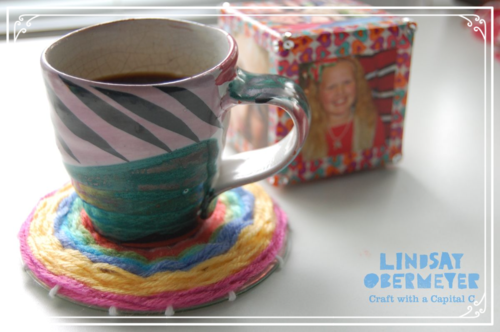 We live in a disposable society. It's easier to throw things out than to fix them. We even give it a name - we call it recycling. - Neil LaBute

I don't know about you, but I have dozens of used cd's hanging around my office collecting dust. I used them quite a bit before I bought a flash drive.  Make one mistake with burning your CD and you are left with this shiny plastic circle for what seems an infinity. They have to be shipped off to recycling plants that specialize in recycling cd's.  Well, rather than recycle. Let's upcycle.  The cd makes the perfect base for a woven project.  Teachers - this project will help you to teach fractions and geometry in a fun, hands on way.They also make a great bellringer.  Just pack up each student's weaving in an individual ziplock to grab on their way into the classroom while everyones gets settled and the next lesson begins. It keeps them busy and out of mischief.  Parents - this is a great road trip project!  Just think, the kids could get all their holiday gifts made while quietly working in the car on the family vacation. Win-win!

Continue reading "Upcycling a CD into a Woven Coaster" »

practice and the creative genius :: a response to the Elizabeth Gilbert's TED talk.

Does artistry always lead to anguish as is custom in much of our Society?  I can't begin to tell you how much I appreciate this brief talk by Elizabeth Gilbert.  In February, I was back in the saddle showing up for my job as she puts it.  Everyday I woke early, did my household chores and then clocked in to work on either a design or fine art project. At first it was exhilarating. I had survived. I was BACK!   You see when you've had a stroke and your body is left paralyzed, you can't talk, you can barely read, your whole existence seem to disappear at least the world as you knew it, but unfortunately you are left with enough memories of life before the stroke to tease and taunt you.  Well, I was back, but only at half level.  I was tired all the time, living on coffee and depressed as all get out.  Could I chase my genie, that allusive fairy who kept teasing me with flights of creativity.  Or was it all over?  Had my life stopped in February 2014.  Well, I want it known for the record, that it hasn't stopped.  I am still showing up every day to do my job as an artist.

Continue reading "practice and the creative genius :: a response to the Elizabeth Gilbert's TED talk." » 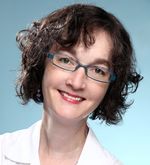 Hear About My Work

Subscribe to this blog's feed
Blog powered by Typepad 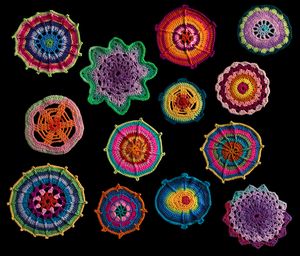 See me work on my new installation

The science behind my new art.